The firm Johnson Brothers is most often associated with two award winning patterns, one of which is ‘Old Britain Castles’. Images of the most famous British castles are included in this pattern: Bolsower, Cambridge, Dunstable, Dudley, Exeter, Haddonhall, Kent, Oxford, Ruthin, Saltwood, Stratford, Warwick. The castles that are depicted on the various tableware pieces were engraved by Miss Fennel, daughter of a master engraver, in 1928. There are 45 different castles depicted on the various pieces. The pattern ‘Old Britain Castles’ has been in production since 1930.

Johnson Brothers, originally a British tableware manufacturer and exporter, was noted for its early introduction of “semi-porcelain” tableware. The company’s name derives from the names of the company’s founders. The four original ‘Johnson Brothers’ were Alfred, Frederik, Henry and Robert. Their father married 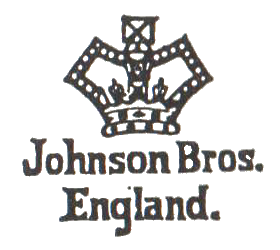 the daughter of a master potter, Alfred Meakin. In 1883 Alfred and Frederick Johnson began production at a defunct pottery known as the Charles Street Works they had purchased at a bankruptcy sale in Hanley, Stoke-on-Trent. At first they specialized in the manufacture of durable earthenware which they called “White Granite”. The success of this venture led to rapid expansion. In 1888, Rev. Henry Johnson joined them, followed ten years later by a fourth brother Robert Johnson.

Having established a solid reputation producing basic “whiteware” the company developed a product known as “semi-porcelain”, a range of pottery that had the characteristics of fine china, but the durability of ironstoneware. This kind of tableware soon became very popular in the United States due to its durability and low cost. In 1889 the Hanley pottery was opened, later the Alexander pottery, and in 1891 the Imperial Works Pottery. In 1896, the Trent Sanitary Works was opened for the production of non-tableware products and Alfred Meakin left the business to establish his own pottery. By 1898, Robert Johnson had relocated to New York City to manage Johnson Brothers’ rapid expansion into the North American market.

Johnson Brothers continued its growth in the tableware industry throughout the first half of the 20th century. After 1918 the popular “Dawn” range of coloured bodies was launched and Johnson Brothers began exporting its tableware throughout the British Empire. During the 1930s the original factory in Charles Street closed and new technology was introduced with the development of modern systems of firing using electricity rather than coal. This in turn led to a better quality product, lower prices and better conditions for the workforce. However, World War II nearly halted production and shipments to the US became sporadic. The post-war period saw a major overhaul of equipment and facilities. Various plants in Britain, Canada and Australia were purchased for decorating, glazing and firing of pieces. Johnson Brothers gained Royal Warrants from Queen Elizabeth II and the Queen Mother. During the 1950s award-winning designs, like “Old Britain Castles” and “Historic America”, became very popular and the company was twice awarded the Queen’s Award to Industry for their contributions to the British economy.

Despite this award, the late 1960s saw changing popular taste, rising competition and spiraling production costs which led Johnson Brothers to curtail further expansion. In 1968, in order to remain competitive, Johnson Brothers joined the Wedgwood Group. This was the period that the popular ‘summerfields’ range was produced, a white background with pink flower and buds around the lip, finished with a grey foliage and a black non-complete edging line. This facilitated a further restructuring of the company and expansion into new markets. In 1981, Johnson Brothers launched the famous “Heritage” range including the most popular earthenware range of all time – “Eternal Beau”. In 1995 the Hanley Pottery closed down and was soon demolished. At the same time a review of many of the traditional Johnson Brothers lines led to a rationalization and a reduction in the number of patterns produced. In 2000 the tableware division of Johnson’s temporarily moved to the J. & G. Meakin Eagle Pottery works.

In 2003, the manufacturing of Johnson Brothers products in Britain ceased, and was transferred to China. According to the Waterford Wedgwood company, production in China cost 70% less than did production in Britain. The closure of British production facilities eliminated around 1,000 British jobs, contributing to the rising unemployment in Britain’s old pottery-making center. The Eagle Pottery works were demolished in 2005.